Call it a mid-life crisis, call it a revelation, call it down right stupidity, but I’ve decided that 2016 will be the year I finally move to Italy. It’s been a dream of mine for a couple of years now, ever since I got sent there on a random job to work for 2 weeks back in 2014. But it’s stuck with me. Italy has lingered in my veins and like a junkie, I need more frequent and harder fixes.

So where better a place to start 2016 than in Milan? Even better, I read that Caparezza will be performing a free concert in Piazza del Duomo. So I pack up my afro and fly to Milan.

In starting the new year and the new Italian chapter of my life, I of course had to prepare and eat lentils. Looking at those little golden lentils I used to cook my lenticchie, I saw not only the analogy of lots of little coins in terms of monetary wealth, but of all the exciting new experiences I hope to have. Increased wealth of cultural benefit, adventure, and probably a subconscious nod towards a more nutritionally wealthy year that I should also probably create. It can’t all be about pizza, pasta and gelato!

Starting the year in Milan means I have to end the year here, now it’s written (and shared on the world wide web), it has to become a reality. 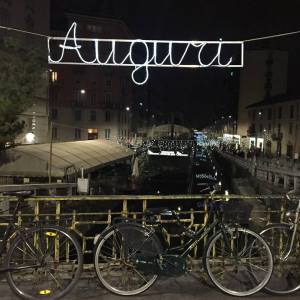 The lentils are traditionally served with sausage.

One thought on “Start as we mean to go on”

In 2014 I was sent to work in Italy. Little did I know that it would captivate me the way it did. And here started my Italian love affair. Since then, Italy has become A.BIT.OF.AN.OBSESSION. (understatement of the year!) This blog is mainly tell my tales of travel, observations and experiences in Italy, along with a healthy dose of food and recipes...yeah...quite a bit of the good food stuff.

(3/3) the well digger finally replies that if he kills the donkey it’s as if he killed him personally, and reminds him that the deal was the money + the donkey as payment and it’s not yet the end of April so he will come and get the donkey in his own time before the end of April or he’ll fill in the well. The man apologised profusely, said he didn’t want to offend, and offered the well digger 5kg of freshly caught fish (he’s also a fisherman) by way of apology! #benvenutialsud
(2/3) So the deal was that both the well should be finished, and the donkey collected by the end of April. On the 24th of April, the well is finished but the donkey still in the field. The current donkey owner contacts the well digger to tell him he needs to pick up the donkey. No reply. The messages get more frantic.... “You need to take the donkey, it’s waiting for you, if you don’t take the dinner I’ll have to kill it” “If you don’t get the donkey soon I’ll shoot it and we will eat it” “If you don’t get the donkey tomorrow I’ll shoot it and bury it in the field so I can grow my crops in the field”
(1/3) Definitely feeling those summer vibes right now! #apericena heard a great story about a #donkey today, a guy was being paid to dig a well and the payment was so many thousand Euros *and* a donkey. The owner wanted rid so he could plant some crops in the field the donkey lived in...#benvenutialsud
#worldpastaday a bit late but here’s my sage and marjoram laminated pasta filled with spinach and ricotta ravioli. Beautiful and delicious 😋
Italian dim sum @ghesemmi perfectly formed dim sum with Italian style fillings. Think ossobuco and calcio e pepe. Exceeded my expectations and worked a lot better than I thought it would! Delicious! #dimdum #fusion #igers_milano #italianfood
#Milano the city where every turn reveals a new beauty ❤️ #igersmilano #igers_italia #italia